Okay, so this surely came by as a complete surprise package for me. I was though expecting it but not this soon, never the less, I’m so very amazed on receiving this award again. Thanks a lot Ty for recognizing my voice. Proudly can now announce that this is my third consecutive award in exactly one month and thirteen days. Woof! Too much happiness to suppress.

1. Thank the blogger who nominated you, linking back to their site.
2. Put the award logo on your blog.
3. Answer the ten questions they’ve set you.
4. Make up ten new questions for your nominees to answer.
5. Nominate ten people.

So, here are her questions for me, and my answers that are to follow.;

Ans. Most people may not have given a correct answer to this one, a diplomatic answer would have been given. But, I believe in embracing my flaws, my regrets. So, yes! I’ve had several moments wherein I’ve doubted myself, doubted my caliber. It was since maybe the atmosphere within wasn’t that great to be in, or the pressure to excel, to prove myself was way too much. Too much for me to handle as a sixteen year old. But now, with experiences I’ve learnt to deal with situations that require me to show valor, and confidence in myself. And today I can surely, doubtlessly say that I’m on the right path, doing the right thing and not once in the last year or even now have I had to doubt myself.

2. Have you ever had a moment where you were completely confident in yourself, and why? 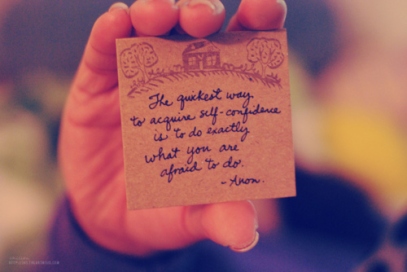 I’ve had several moments wherein I was utmost confident of myself and the thing I had in my mind to do. One of them being me choosing law as my prospective career. Since the very beginning, as early as grade 8th I knew that I wanted to pursue law and that I’ll become a successful solicitor one day, by God’s grace. That was one of the few things about which I was, and proudly am very confident about. Another thing I was completely confident about was in blogging. And my actions are speaking far beyond words for my blogging journey, Isn’t it? 😉

3. Would you rather be remembered for what you can do or who you are, and why?

Ans. I think a balance of both are necessary. Honestly, Who one is, is their identity and what one can do is their ability. And they’re two very different things. Actions always speak louder than words and yes, that’s my life motto forever. So what one can do is a different story all-together till one actually does it.

4. Which do you fear, failing a million times or never attempting at all?

Surely fear not attempting at all. In my opinion, failing isn’t what general people perceive it as, It’s actually;

5. Are you doing what you believe in, or settling for what you are doing?  How do you know?

Why settle for anything less than what you deserve? Don’t let anyone define you, make your own definition. I’ve never believed in settling for anything less than what I deserve. I’ve believed in doing justice, raising voices against the wrong doings and spreading wide-spread awareness about it, Which I’m very much doing too. I know it because I’m pursuing things that will make me successful. Taking a very quick example, I’m writing on burning issues, actively participating in legal events and lots and lots more to know that I’m doing what I always believed in doing.

6. How do you stay uplifted during the hard times in life?  What’s your motivation?

Ans. My motivation is my mother. She’s my first God. She’s gone through the worse of times and never complained, and I’ve never even gone through half a percent of that, then what am I to complain about? Whenever I’m facing hard times, I think that everyone is going through something that has changed them for the better or the worse, so I ain’t the only one suffering out here. After all, when the night is darkest, dawn is not far, right? Then too my mom remains my best motivation.

7. What is that ONE thing you would change in the world, and why?

Ans. There are way too many things which I would want to change in the world. But what remains on my priority list is, Racism against women, especially in India. What do you’ll even thing women are? It’s absolutely disgusting how men think they’re all the way superior to women in every walk of life, because practically they just aren’t. Rape, they think raping a women is cool, yeah? It is? They say the girls clothes instigated them to rape? Now, we may murder some and say their stupidity instigated us to take such a drastic step out of nowhere.

8. What is that ONE thing that motivates you to love, and why?

One thing which motivates me to love? There are lacks of people , millions of them who crave for love. We can all do our bit to spread love, spread smiles, spread humanity. Be thankful that you’re loved, and let others be thankful to you for the same.

9. What is something you know you do differently than most people?

Ans. What I do differently from other people is adopt a totally different attitude towards people. Most of the people I know, do not respect someone who seems inferior to them. But, I guess I can do my bit by making them feel at par, having a word or two with them, showing a sweet gesture towards them is all which is needed to make them feel happy and be different than most people.

Ans. My approach makes me, me. I guess the question is answered in answer number nine.

Following are my nominees :

Here are my questions for the nominees:

1. Is there any life change that has changed you for the better or the worse? If yes, ten which is it?

2. Would you rather have a few friends or a handful? why?

3. What is the one thing that keeps you going ,no matter what?

4. Has blogging changed your life? How?

5. Is there any country or place you want to visit badly? Also why?

6. What makes you think that you’ll achieve whatever you’ve set in your mind?

7. Is there any thing you regret? Why?

8. If the world was ending tomorrow, what would be that one thing you’d like to do before you die?

9. Are you addicted to anything? Why is it so addictive?

10. What is that one habit that has stayed with you all through your life till now?

Thanks so much everyone, for it’s your love that keeps me going through writing.!